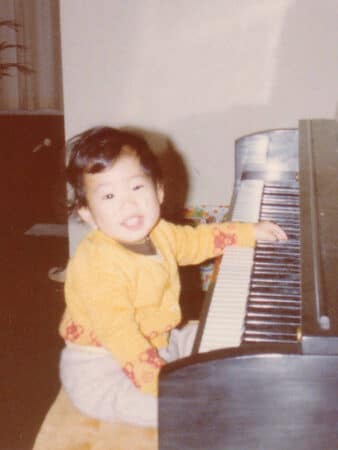 My journey began at the age of 2 when, according to family legend, I said “oa wike mugas” (i.e. “Noa likes music”) and was given my first violin – that “violin” being a Cracker-Jack box with a ruler taped to it. Midway through kindergarten, I gave my first performance with orchestra as a student of Dr. Shinichi Suzuki (founder of the Suzuki Method) in Matsumoto, Japan, and shortly thereafter, made my TV debut on WBNS-TV’s Front Page Saturday Night.

From an early age, I practiced every day, 365 days a year. Yep, even on days when I had the flu, or jammed my finger in gym class and it got all swollen. The work did pay off, as it led to opportunities to perform as a soloist with the Columbus Symphony, Springfield Symphony, Welsh Hills Symphony, and Oberlin Orchestra. I also performed on radio broadcasts for WOSU-FM, WCBE-FM, and Israel’s National Classical Music radio station.

A fellowship to the Aspen Music Festival allowed me to play with world-famous conductors, emerging concert artists, and future orchestra members and principals. I’ve also been fortunate to have had coachings and master classes with musical figures like Isaac Stern, Leon Fleisher, Emanuel Ax, Janos Starker, Max Rostal, and Yfrah Neaman.

My life revolved around music for as long as I can remember. Along the way, I learned all about discipline, sacrifice, and what it takes to be successful. But I also came to see that this wasn’t quite enough. Even though I certainly had some good days, I struggled with inconsistency and felt that my playing often fell short of what I knew I was capable of. It was frustrating to sound pretty darn good in the practice room or lessons, and then sound like a totally different person in performances and auditions.

For years, I just assumed that I needed to practice more. I figured the nerves would fade away at some point. Of course, neither was true; sometimes I’d sound great, sometimes just mediocre. I couldn’t figure out how to control it.

It certainly wasn’t my teachers’ fault. I had some pretty amazing teachers in Marya Giesy and Michael Davis, who were instrumental in building up a great foundation in my early years. And I was really lucky to have had opportunities to study with many other incredible musicians and teachers all along the way; a list which includes Stephen Clapp, Ronald Copes, Franco Gulli, Paul Kantor, Masao Kawasaki, Roland & Almita Vamos, and Donald Weilerstein.

I couldn’t have asked for a better or more complete musical training. Yet, I knew there was more I needed to learn – I just didn’t know what.

A whole new world to explore

My second year at Juilliard, I signed up for a course titled “Performance Enhancement for Musicians” taught by Don Greene. It sounded interesting, although I was pretty skeptical that an Olympic sport psychologist and former green beret could tell me anything about being a concert artist.

To my surprise, what I learned that semester changed not only how I performed, but how I felt about performing. My whole approach shifted. Even my practice habits changed dramatically.

I was hooked. Sport psychology opened up a whole new world of skills to learn, skills that I knew would help me become a more complete musician and performer, but to which I had never been exposed.

After finishing up my masters at Juilliard, I went to Indiana University to pursue a doctorate in psychology. I was determined to learn more about peak performance and find answers to questions like “Why do some people thrive under pressure while others choke?” 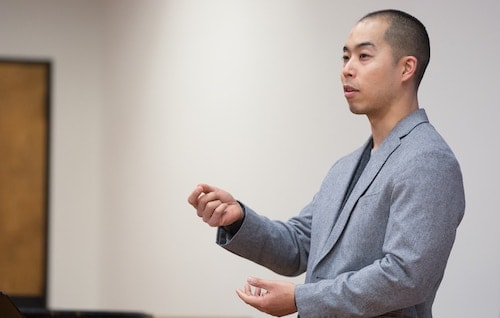 It’s been many years now since I made the decision to put my violin down and pursue psychology, but I haven’t looked back and remain committed to helping people learn what it takes to shine under pressure.

Most of my time is divided between teaching live classes (both in-person and online), writing and podcasting, and working individually with students and professionals in the performing arts who want to play more like themselves when it matters most.

I’m on the faculty of The Juilliard School in NYC, the Cleveland Institute of Music, and the New World Symphony in Miami, FL. I conduct workshops on performance enhancement and overcoming performance anxiety, and have done so for institutions including the New England Conservatory, Peabody, Curtis, Oberlin, Indiana University, Northwestern University, Cincinnati Conservatory, and the U.S. Armed Forces School of Music. I’ve also been a speaker at seminars such as the Starling-Delay Symposium and National Orchestral Institute, for organizations such as the Music Teachers’ National Association and the National Association of Teachers of Singing, at summer programs like The Perlman Music Program, and in online/media programs.

Why I write so much about psychology for musicians

I started this blog so that I could put into writing, some of the things I’ve learned over the years from both my musical background and my psychology training. Essentially, it’s a collection of all of the things I wish I would have known when I was frustrated about my practice, and stressing out about the next audition, competition, or performance.

I hope you find it useful in your own journey as well. =)